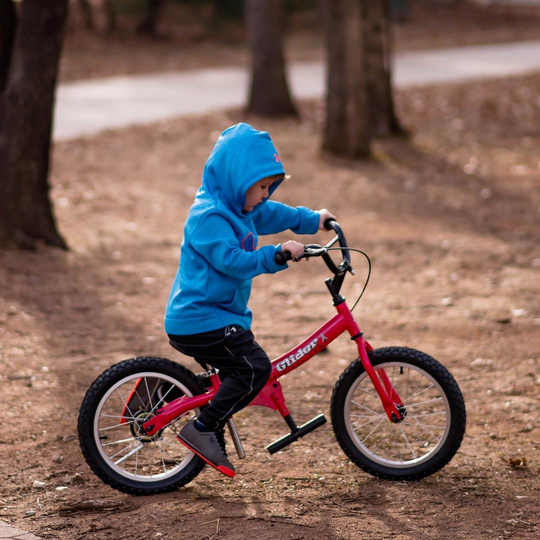 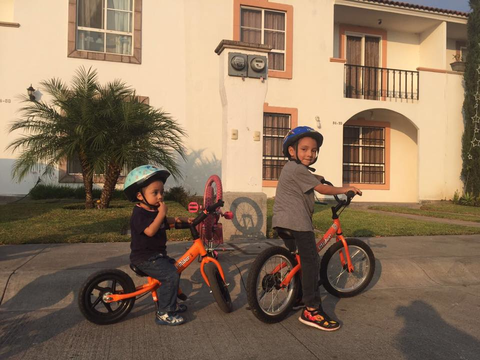 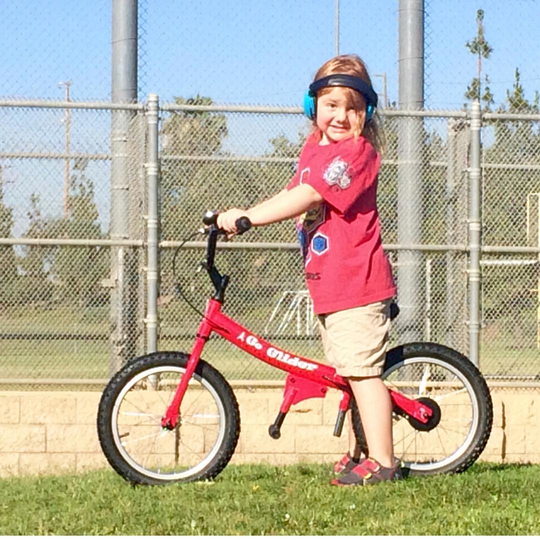 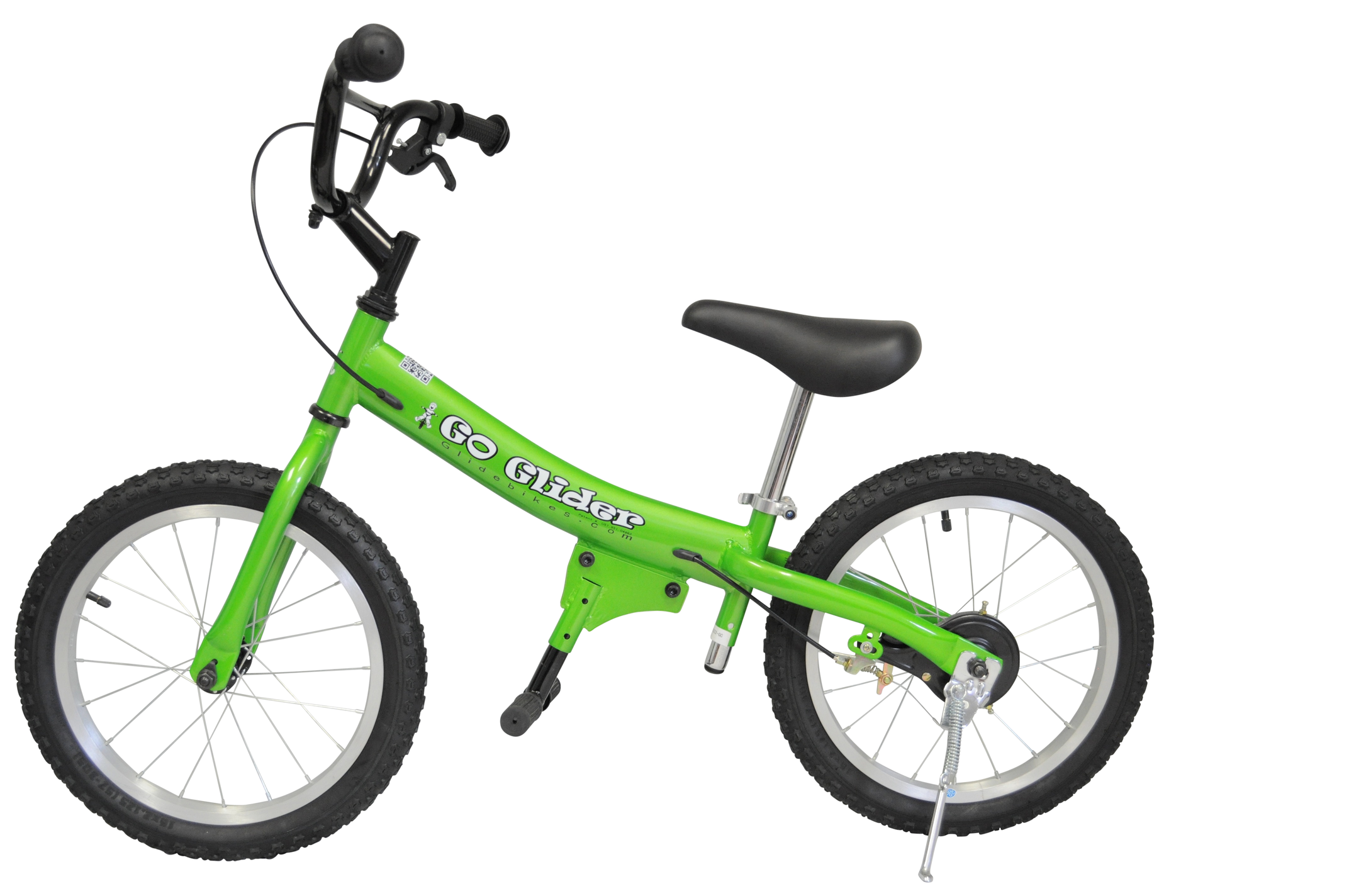 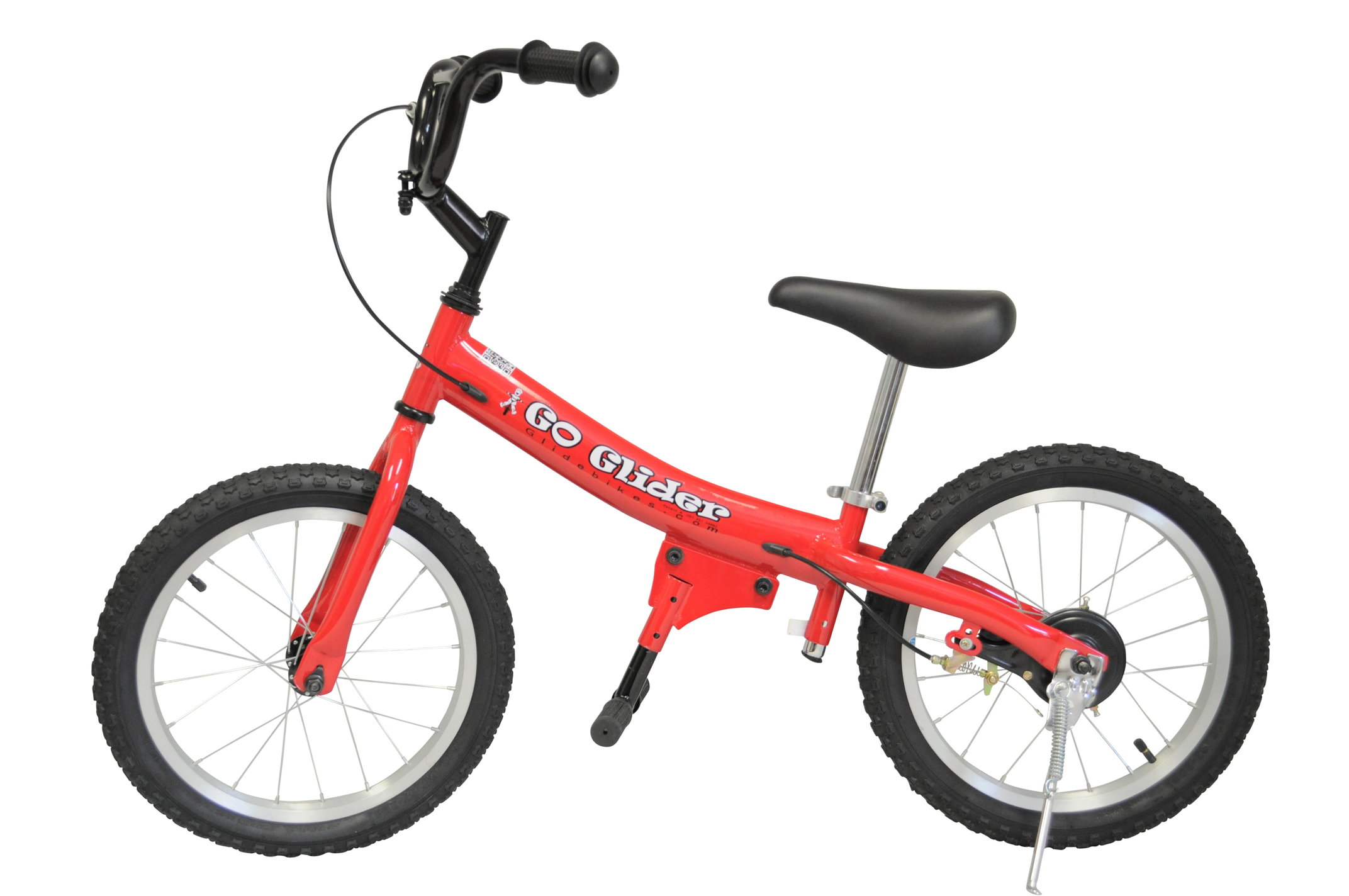 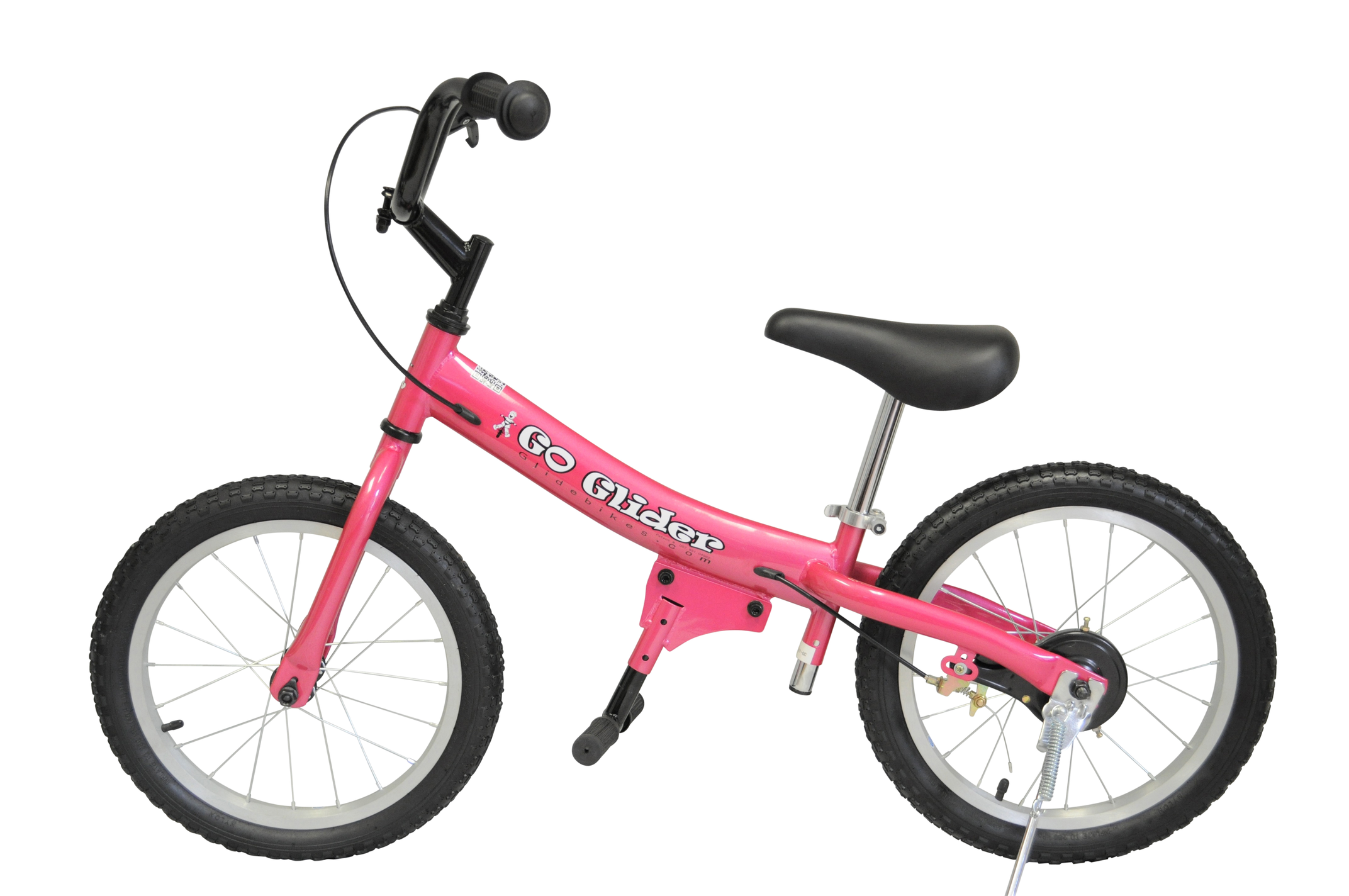 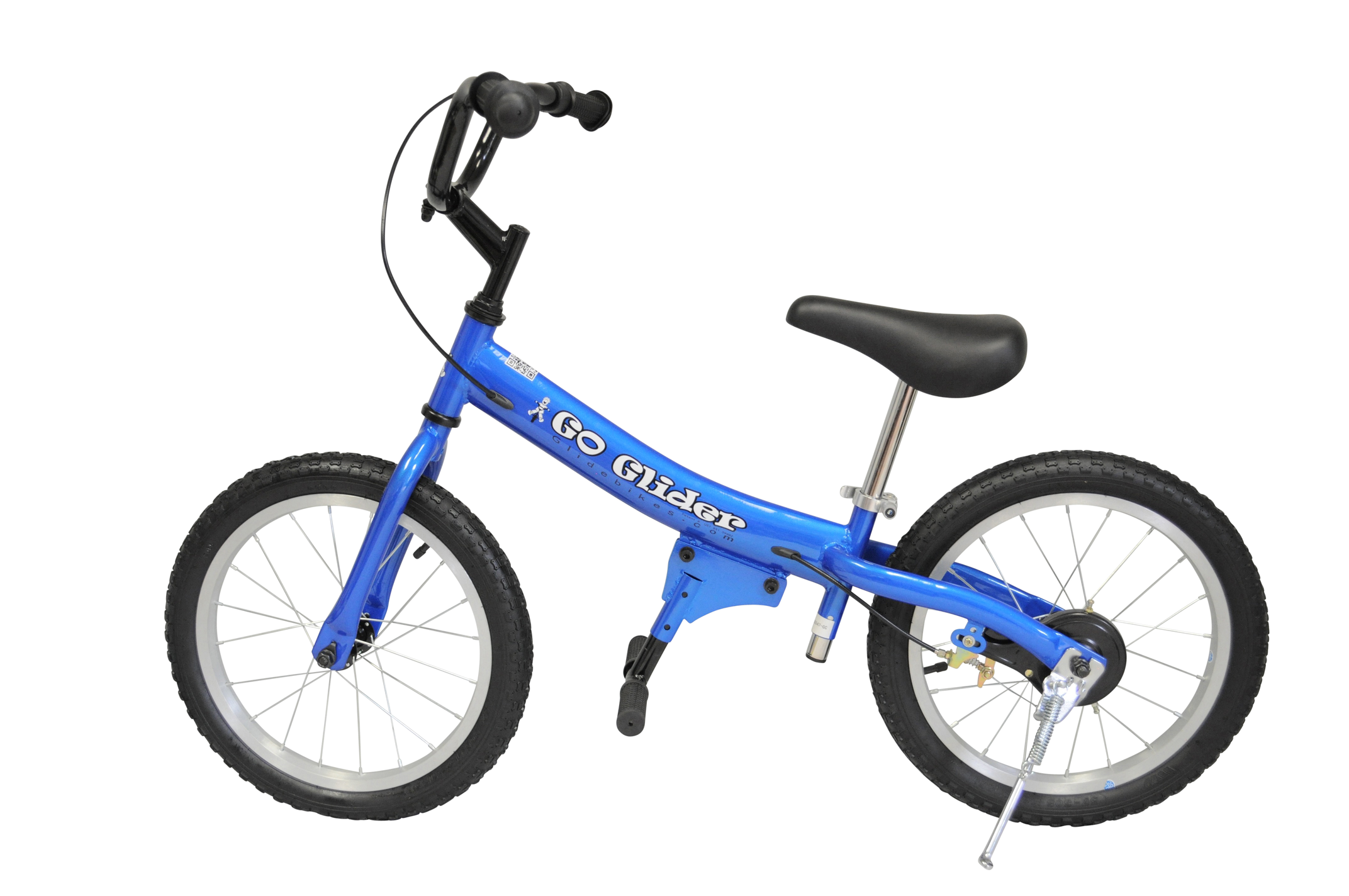 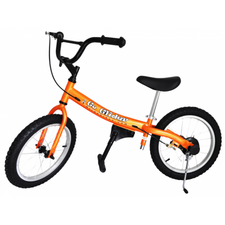 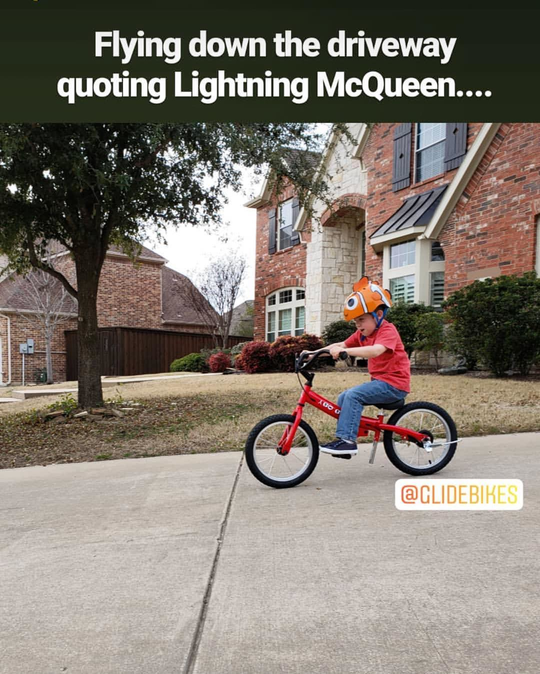 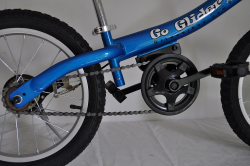 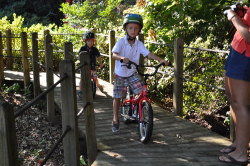 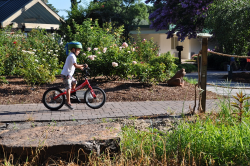 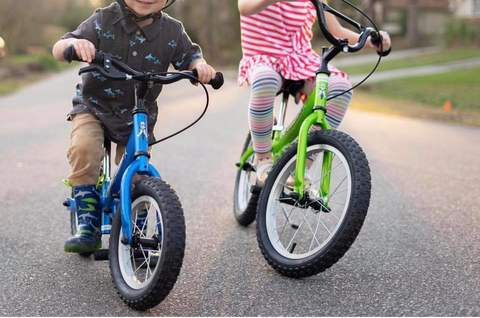 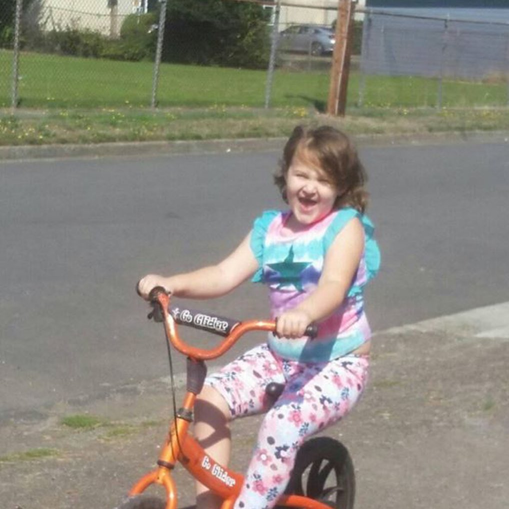 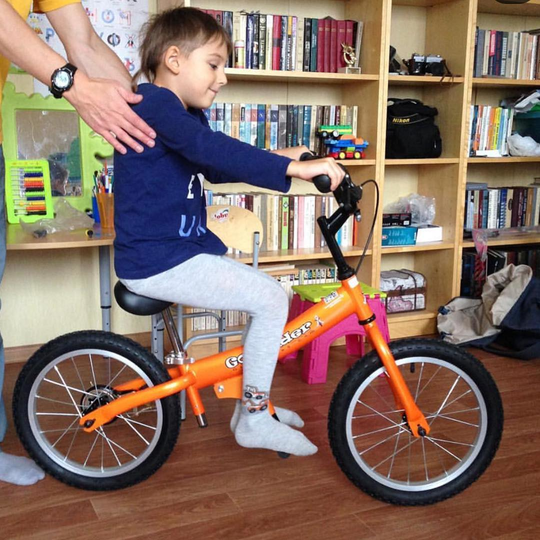 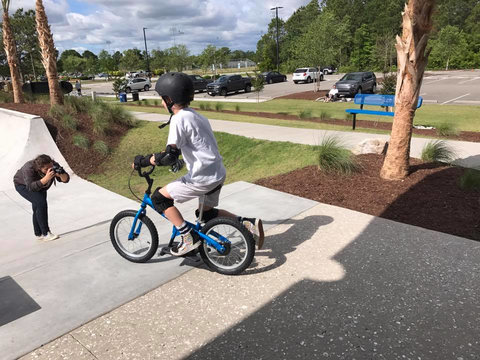 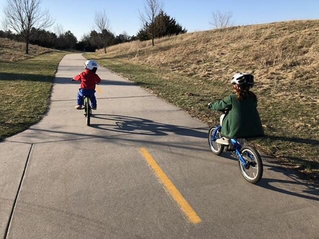 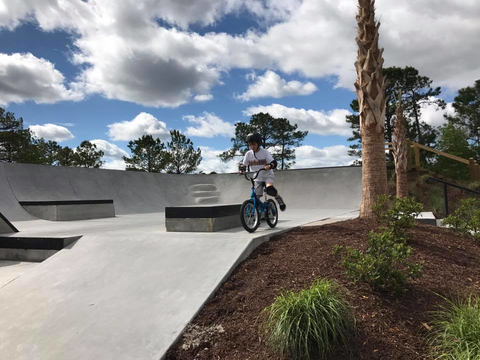 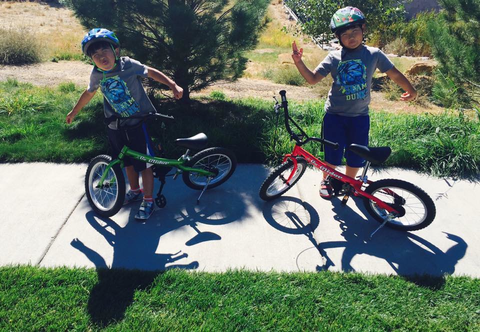 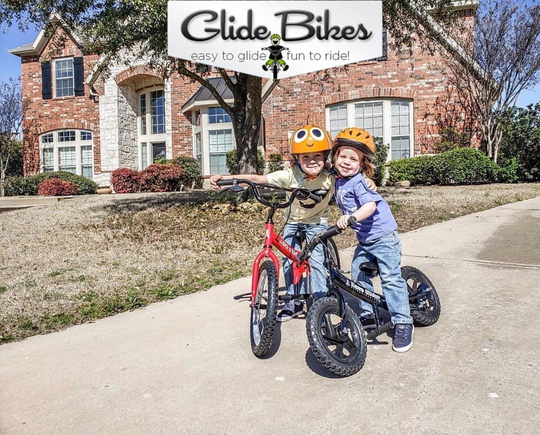 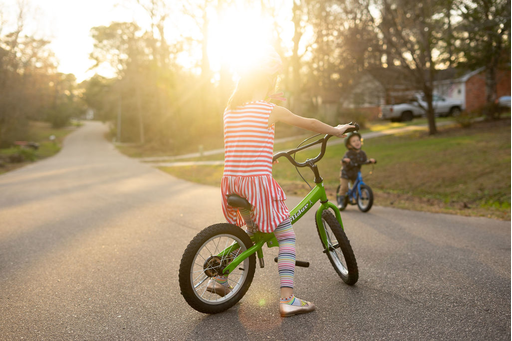 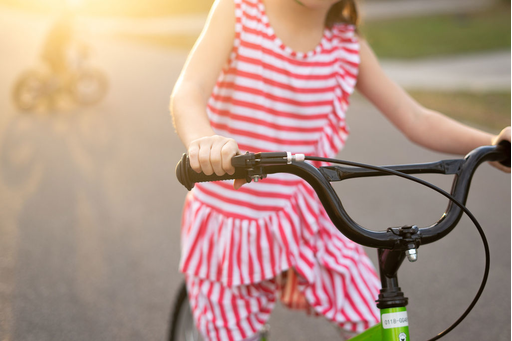 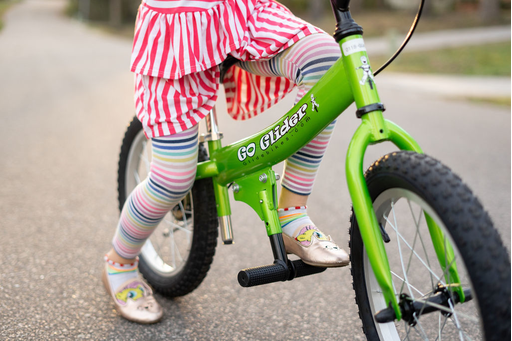 The Go Glider now can convert to a pedal bike with the optional kit. Just pick yes to pedal kit you when selecting your Glider!

The Glide Bikes Go Glider is the best learning bike for kids ages 5 – 10 years old. With a kickstand, hand brake, and foot pegs it is outfitted with everything a cyclist in training will need to hit the ground running. This product is compatible with the Pedal assembly! (Sold separately) Choose between the five brilliant color options and select a Go Glider that will combine the fun of gliding with the most efficient method for learning how to ride a bike to make your childhood experience one that is full of happy memories. *Note we no longer include pads on the handlebar and stem, do to the redesign of the Stem, it is not needed.

Prev
1 2
Next
My 7 year old loves it. She rode it for about a week and now she's riding her other bike with peddles and doing it well. Well worth not having to chase her and falling over her when she did fall. The low center of gravity made this easy for her to pick up down a hill. She would go about 10 feet at first but the next night she was going about 500 feet down our hill.
Tom Haskin 08/03/2016, 02:35 PM
Simply amazing!!! I bought this bike for my 8 year old daughter. After a few days, she really has her balancing down. She is gliding further and further each day. I'm confident that she'll be able to transition to her bike with pedals soon. She enjoys riding her glide bike and all the neighborhood kids think this bike (with no pedals) is the coolest thing! So glad I purchased the Glide Bike!
Jason Meekins 11/16/2015, 10:45 PM
This bike is well worth the money!!! Solid sturdy bike, easy to put together. We were having a really hard time teaching our son how to ride a bike. . . two weekends of gliding. . . and he was ready for the bike. I can't promote this product enough. We had a different glider bike years ago and it was junk - this one is the way to go!!!!
JK 10/21/2015, 04:14 PM
The Go Glider is ready to ride. Thank you for Face-Timing with me to walk me through the assembly. Everything fit together, and will be ready when our grandson arrives tomorrow. Great invention and great customer service!
Laurie 07/24/2015, 10:09 AM
This product is amazing and has brought so much joy into our lives. It is a miracle bike that taught an 11 year and 8 year old to ride a bike in less than 1 week. Thank you Glide Bikes!
Amazing product! 07/07/2015, 10:36 PM
Great balancing tool, my kids went from training wheels, no confidence, to successfully getting on a two wheeled regular bike within 2 weeks. I have a problem with the brakes though, it arrives not tight enough, and when I attempted to adjust it, it came apart, and I was unable to get it tensioned correctly. A better brake and adjustment system would be beneficial
H lo 06/26/2015, 10:16 PM
Great bike for my autistic son and his younger brother. Only prob we have is that the steering loosens so handle bars and front tire are not aligned. We just tighten and continue
KD 06/22/2015, 10:25 PM
Great balance bike. My 6 yr old son loves it. We take it to the park every Sunday afternoon and he has become quite the dare devil with it this summer. He has autism and in one summer is a great balancer.
Fauna Deyo 10/14/2014, 08:43 PM
Our son loves his Go Glider! He loved that it was like a "big kid" bike with hand brakes and a kickstand. Even better, he hopped right on and took off. He was wobbly at first, but that was fine, since when he was trying to learn on his pedal bike minus the training wheels, he just could not figure out how to balance and was so stressed about that he didn't even want to try anymore. After two weeks of casual playing around with his Go Glider, he was very confident and we went all kinds of places on it. After about a month of riding his Go Glider, he tried out his pedal bike again. We are happy to report that the transition was absolutely painless! He started out scooting along, as if he was on his Glider, then realized he could put his feet on the pedals... and he just flew! The look of joy on his face and the easy, easy transition to the pedal bike made the Go Glider a very worthwhile investment. He is so confident now, so different from the sad little boy just a few weeks ago. We are thrilled!
Angela Holm 10/13/2014, 09:29 AM
We couldn't be more pleased!! We purchased this for our 10 yr old son with sensory processing disorder and high anxiety who has never been able to learn to ride a bike (there are just so many steps/functions for the brain to process to learn at one time to be successful in bike riding). After having his glider bike for about 2-3 weeks he had overcome his fear of being on a bike and had mastered his balance and steering. We took his training wheels off of his old bike we had tried so many times before for him to ride and worked with him on getting the pedaling down then he was off!! The pride on his face was priceless and the confidence he now has means the world to us. We have recommended this bike to everyone we know that deals with children with sensory processing disorder. Again, we couldn't be more pleased!!
T. Kendrick 10/10/2014, 12:36 PM
Prev
1 2
Next
Write a review